Home Of The
Spirit Animals

By: Cynthia Raschke
No one knows for certain the story of the first foal born in America.

Home Of The Spirit Animals tells the story of five shipwrecked horses from a Spanish expedition in the year 1496. A teen-aged sailor named Diego, the horses and a few pigs wash up on the coast of what is now Texas after swimming away from a hurricane that sinks their ship. 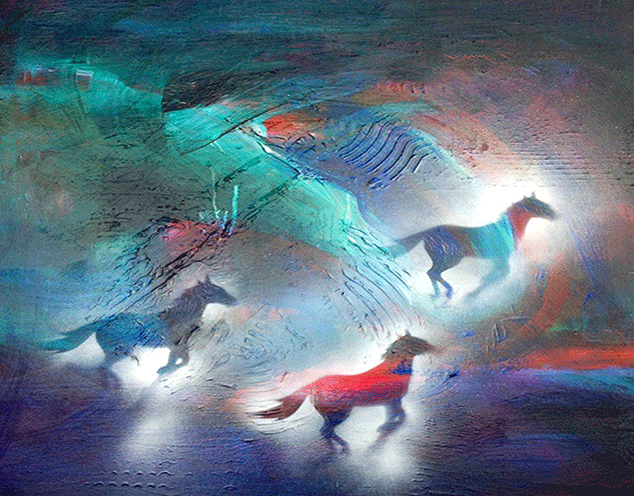 The inspiration for Home Of The Spirit Animals sprung from the intriguing possibility that the horse was the first major land animal to circumnavigate the globe. From the prehistoric evolution of the species Equus in America to its trek across the land bridge to Asia to its journey west from Europe across the Atlantic Ocean to return to America over five hundred years ago. 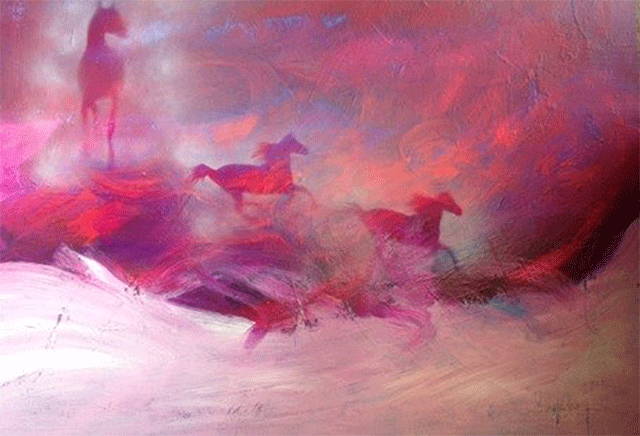 Home Of The Spirit Animals Gallery

Home Of The Spirit Animals gallery showcases the beautiful artwork of Susan Swanson. 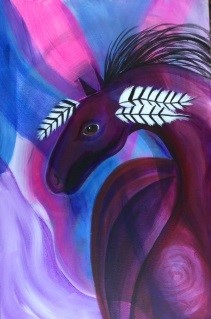 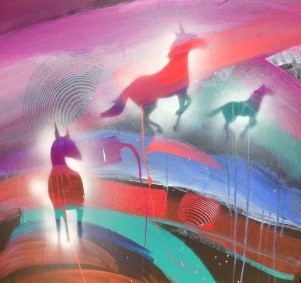 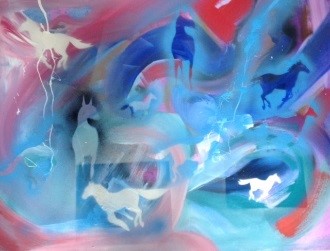 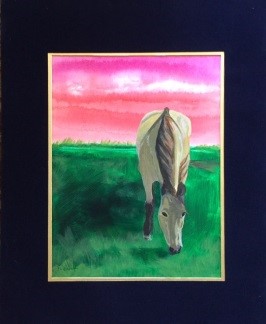 Home of the Spirit Animals

No one knows for certain the history of the first foal born in America.

Home of the Spirit Animals  tells the story of five shipwrecked horses from a Spanish expedition in the year 1496. A teen-aged sailor named Diego, the horses and a few pigs wash up on the coast of what is now Texas after swimming away from a hurricane that sinks their ship.

Although Diego was the expedition’s clerk apprentice, he dedicates himself to the welfare of the small herd. The lead stallion is Palomar, a powerful black-brown Arabian. Mariana, a graceful silver-white Andalusian, is expecting Palomar’s foal. The other stallion, Rialto, is a young, finely-trained grey Andalusian. Frisky chestnut-red filly Bonita and the always-hungry dun-colored mare Flora are tough enough to survive along with their finely-bred stablemates.

Diego and the herd follow the pigs across tidelands as they make their way inland to find fresh water. The horses endure alligators, mosquitos, and coastal jungles with little space to graze, and the nomadic people Diego eventually encounters are not familiar with horses.

Because the coastal natives do not welcome them, the future of Diego and the herd seems bleak. Fate intervenes when Diego falls ill and is attended by a slave girl named Nehmae. She sees an opportunity for escape by aligning her fate to Diego and the animals she calls “tall-legs.”

In a journey that tests their trust, Nehmae leads Diego and the horses to the village of her birth in the hill country of central Texas. While Nehmae’s people rejoice at her return, most of them do not accept the tall-legs and the strange young man who commands them. It is only after the lame son of the village chief demonstrates the partnership that is possible between man and horse that village elders give Diego a chance to prove himself and the tall-legs worthy.

Over time, Nehmae’s clan watch Diego work tirelessly to build a corral and care for Mariana and her newborn foal he names Nueva. Village leaders witness Diego’s patience and generosity in teaching people how to ride horseback. Fellow hunters see the horses’ value in hunts for fowl, deer and bison whose meat and hides are essential to their way of life.

If other tribes discover the unusual animals, will they threaten Diego and the herd? Will the extraordinary tall-legs and Diego’s gentle spirit and surprising courage earn them a permanent home and a place in Nehmae’s heart?

A historical fiction and coming-of-age story set in an era when old and new worlds collide, First Foal tells how horses might have found their way to America. Some people would say, found their way back home. 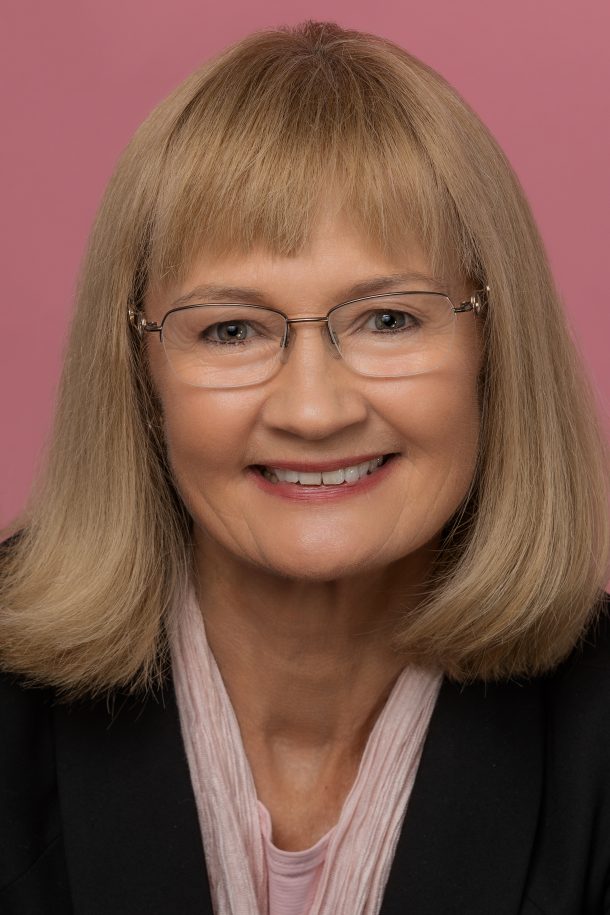 Inspiration for Home of the Spirit Animals

The inspiration for Home of the Spirit Animals sprung from the intriguing possibility that the horse was the first major land animal to circumnavigate the globe. From the prehistoric evolution of the species Equus in America to its trek across the land bridge to Asia to its journey west from Europe across the Atlantic Ocean to return to America over five hundred years ago.

I grew up in rural Pacific Northwest, went on to graduate school in the Midwest, and now live in Massachusetts, but my fascination for horses--which began before I can remember--never dimmed. The horse I owned as a teenager was loyal to me, but only half-broken and I used to tease him that he was only slightly more trained than his mustang brothers.

The inspiration for Home of the Spirit Animals arose when I learned that the ancestors of mustangs in North America were not native to the continent. I learned they descended from horses that Spanish conquistadors brought on expeditions during the 16th century.

How could that be so, I wondered? Wild horses had always roamed America’s untamed lands from barrier islands in the east to grasslands in our heartland to mountain valleys of the west. Native Americans were avid horsemen and owned huge herds when pioneers arrive to settle in America.

Instead, I found out, most American horses from backyard ponies to farm horses to wild mustangs are descendants of horses brought here from Europe. Although one can find many feral herds around the world, the only authentic wild horses today live in northern Asia.

Historians trace the actual first foal born in North America to Mexico, and as the Spanish settlers spread north, the state of New Mexico was the most likely site of the first American horse ranch. Horses did escape from first ranches and found their way to indigenous people and some herds became feral. Is it possible that horses also found their way back to the land of their species’ origin?

Archeologists have found evidence that a crucial evolutionary path for Equus, the ancestor of today’s modern horse, originated in America. Like many other species, Equus herds crossed westward on the Bering land bridge to central Asia where they continued to evolve. However, in North America, the early horse was among other megafauna--large prehistoric mammals such as the mammoth, sabre-tooth tiger, and dire wolf--to die out about ten thousand years ago.

Meanwhile, on the grassy steppes of central Asia early horses thrived and eventually were domesticated by mankind as a beast of burden. Beginning in 1493, Spanish explorers took horses on ships to the Caribbean islands and later to Mexico.

By the 18th century, European colonists discovered herds of feral horses living on barrier islands in what is now Texas. According to historians many of those horses, such as the herds that once inhabited Mustang Island, had survived shipwrecks.

Such a story of survival inspired the novel Home of the Spirit Animals.

The horse circled the Earth over a period of 100,000 years. From the prehistoric evolution of Equus in America to its trek across the land bridge to Asia and Europe to its journey across the Atlantic Ocean to return to North America. To return home. 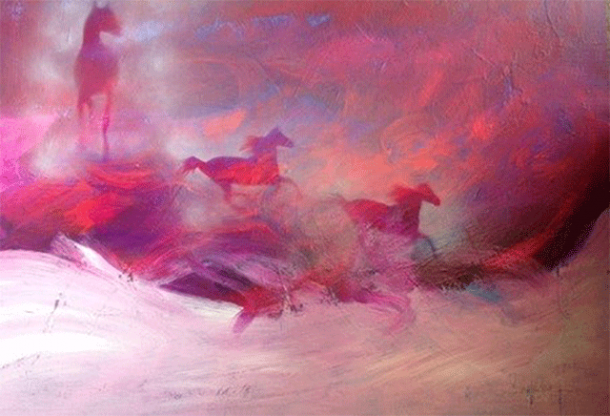 When I was young I was very quiet and shy as well as sensitive.  I was not very verbal and yet I could sit and draw for hours. It was a way that I could express myself through the arts. It gave me an avenue to be aware of my feelings and thoughts while doing something I loved.   My mother signed me up for art lessons and I thrived and welcomed the passion I felt while painting.

When I was a bit older my father took my sister and I to a farm where there were horses. He ended up getting each of us a horse which gave me another avenue of expression and connection. My world became a world of art and horses among other things that were required of all children. When I look back I thank my mother and father every day for providing a place for my passions and for making my growing up happy and healthy.

It has not been but the last 10 years that I have started to love to paint images that remind me of my roots growing up in the Southwest.  Horses for me express resilience, beauty and strength.

Having grown up with horses I got to see how their personalities were different from one another and enjoyed working with them. My responsibilities were great in taking care of my horse which helped me learn to take care of something I loved.

Besides horses and art, I had other experiences growing up that fueled my passions.  At a very young age I lost two friends after suffering from disease.  In high school two highly creative friends had accidents and suffered from brain damage and were never the same. I heard around that time there was a field of study called Art Therapy. It helped people of all ages and disabilities express themselves non-verbally when they were not able to verbalize due to physical condition or emotional trauma.

I went to get a Masters in Expressive Arts Therapies which uses Art, Dance, Music and Psychodrama to help those in need of non-verbal expression. For 40 years I worked with children, teens, the elderly and those suffering with Alzheimer's helping them find expression, success and joy.

After retiring I moved back to the southwest where I can ride horses again and can take underprivileged children on a journey with a horse.  I am so blessed to have shared my passions with so many wonderful people.  I hope to continue for a long time.